It was the picture that shot my drink through my nose. I followed the link sent by one of our team moms with photos from our very first competitive gymnastics meet. And there was Sydney, in all of her Sydney-ness, basking in the glory of the podium. The medal, the grin, the salute… the child was completely transported to another world, lost in the blinding beams of the spotlight…

Holy cow Sydney. We didn’t know what exactly to prepare you for leading up to your first ever meet. How not to pout? How not to gloat? This whole competitive gymnastics thing was meant to give you something active to focus on, learn about hard work, team camaraderie and hopefully be lots and lots of fun, but I’d honestly not given a bit of thought to the awards part of the whole scenario until the morning car ride to the competition. That’s when it hit me.

I have distinct memories of my ONE real gym meet. I was seven and mom cut my hair off in honor of Mary Lou, but beyond that I don’t remember exactly what happened… Just how I felt afterwards. Let’s just say that the trophy I received was just a nod to the meet fees.

I think it was the first time I really connected fear with failure, played out in front of bleachers occupied by real live people. And while it was the first of many confirmations that I was neither particularly coordinated nor particularly strong, the greatest takeaway in my 7-year-old spirit was the feeling of not being good at something. No inner “ada girl” for trying. Not a “okay, so next time I know what to expect.” No no, for reasons I can’t decode almost thirty years later, on that day I learned that failure must be private and therefore safe.

So when our child took to the floor, vastly more confident than I had ever been in all of my days combined, I did my best to siphon the memories flooding back at me. Cognizant of the difference between me and my daughter, yet balancing my personal experience, I caught myself striking a tentative pose. “Wow – it’s so fun to watch Sydney be Sydney. I sure hope if she’s terrible it doesn’t bother her.”

Don’t you wish I was your mom?

Event 1 – bars. The moms lined up like paparazzi with manners, nodding at each others’ lens selections while the dads had their smartphones set to HD video capture. Grandparents, of course, were relegated to the strollers section so we could document every second of the action. We were all so genuinely excited I think I took photos of every single team mate in every single move.

Then our girl took to the bars. Cast on, back hip circle, dismount, salute.

Floor, beam, vault. She did her thing, we clapped as routines were not quite nailed but without disaster. It was everyone’s first time, and it was so fun watching these little awkward champions clad in sparkly spandex brim alternately with concentration and excitement. This really was going to be so fun!

And then came the awards. My stomach hollowed in the shadow of the unknown. “Please God, if she’s in last place, help her be completely graceful or completely oblivious.” I don’t remember much about the next few minutes except that I got to hide my nerves behind the mommy cam. Focus, snap – yay, she’s not last. She’s smiling. Oh thank God there are lots of medals. Whew. So proud of you babe! Hey let’s not knock our friends over trying to hold the team award.

So fast forward to this very office chair, opening the email and feeling carbonation enter my sinuses. Here’s our friend Andrea’s photo:

Oh my word. I mean I knew she was excited, but I didn’t realize just how excited. She was practically her own Dr. Seuss cartoon!

I plug in my own camera. No small thing since it’s not unusual for images to sit for six months at a time. Since having three kids, the luxury of a couple of hours to document and edit photos is as rare as wearing black without a trace of breakfast or finding a personal shopping unicorn. But now I was dying to see what I’d captured at that meet. 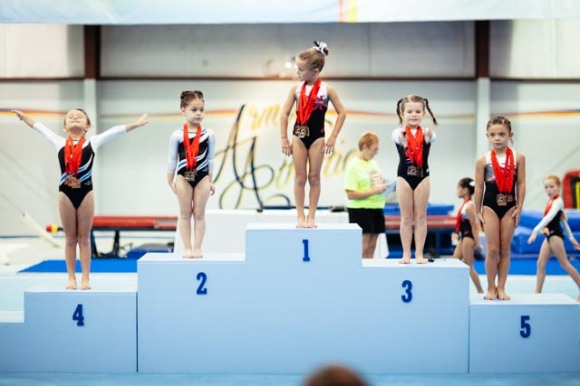 This was probably the most viewed facebook photo I’ve ever posted. I’ve run intentional work-related marketing campaigns that were shared less, but who could resist this little firecracker completely ignoring her position. Live the bliss baby! And that was the end of my narrative.

Except that something happened that I completely overlooked until going back through these photos at the END of the season.

She DID notice. But instead of being defeated, she took heart.

Meet 3
“Mom – I told the coach that I’m going to get that gold medal”
You keep giving it your best, kiddo.

By meet #4 I wasn’t sure how to respond to her confidence. Friends would see photos of her meet salutes on facebook and stop me in the hall to tell me how inspired they were by her. I would laugh and say that we were working on earning that salute. I wanted her to understand that everyone can’t be the best, but that I knew that she was trying and I was proud of her for trying.

But still, she’d set her sights on that gold and it was slipping from her. She was starting to lose her spark at the meets, falling further and further behind on her scores and her placement. Nearing the end of the season, I’d talked to her coach, asking if there was anything we could do to help and learned that she actually had crooked feet because of knock knees. At some point this would become a boundary to her advancement, but she was young so we would just keep working hard to keep gymnastics fun.

The morning of the state finals, she was a tired wreck. Because Thanksgiving was so late, the Gray family was getting our Christmas tree later than usual, and Santa had yet to send our favorite elf. Oh Holy meltdown. Turns out we’d spent a sleepless night worried about whether or not Chester would appear. I scrambled to get Daddy, Stella and JP out of the house so we could have a few moments at home before she and I made the three-hour drive together. So much for best-laid plans – her team warmup jacket was nowhere to be found. We were in the middle of tearing her closet apart for the third time when she said something that stopped my rampage cold…

“Mom, this is my last chance to get the gold.”

“Mom, I told coach Judy I was going to get the gold and this is the last meet.”

I buried my knees in the carpet in front of her, grabbed her hands and stared her in the eye.

Moving quickly into deflect and protect mode, I gestured wildly to the wall behind her with all the medals from this season.

“Do you know how many medals I won in gymnastics? ZERO. And look at all of those medals hanging on your wall. It’s amazing to me! Syd, I have no idea if you’ll win the gold today, or next year, or someday, but I will always remember how much I enjoyed watching you give it your best. Mommy and daddy love you, your coaches love you, your teammates love you and that’s what matters. Your principal is even letting you out of school to compete. Everyone is rooting for you!”

Oh that feeling when words just aren’t enough. How heavy my heart was on that drive. It wasn’t just that we had to stop at her teammates house to borrow a warmup jacket, or that daddy had to stay in town for an emergency meeting. It was that there was a real possibility that I was just hours away from being the lucky chauffeur of her life’s first tangible disappointment on the back roads of Alabama.

I had no idea what I would say to make her feel better. What in the heck even qualifies me? I’m just mom. That person who’s not even credible or objective because I’m guilty of framing and hanging her scribbles. That person who was so overcome with emotion and fear the first time I was alone with her in the hospital, all I could say for the first three days to my baby was “Hi!” That same person who finds herself shell shocked at 36, still struggling with where to put her own bags overrun with faith and failure.

We dashed through the cold rain into the building together. She spotted her coach and ran off. I found a seat in the bleachers and realized I’d completely forgotten my camera. Scores were flying, things were moving quickly, and I managed to capture the end of her routine on my phone to share with daddy.

And do you know what? This knock-kneed, crooked-footed, never-stopped-believing kid tied for first place on bars and became not just a gold-medal winner, but the 2013 State Bar Champion in her division. And she completely schooled her mommy on what it looks like to really believe in yourself.

Sydney Gray, I am eternally proud of everything that you are. You inspire me. I am so lucky to be your mommy.

“I tell you the truth, unless you turn around and become like little children, you will never enter the kingdom of heaven!
Matt 18:3

2 responses to And that’s how you win the Gold. 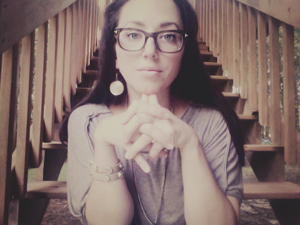 My name is Adrienne Gray. I'm pretty terrible at being anything other than exactly me. I am a wife, but not a perfect one. A mommy to three, one who gets lots of points for trying. I can't clean to save my life and I lose my coffee cup and cell phone at least 42 times a day. Sometimes I write. Sometimes I hide under my sheets. I'm a recovering Christian and once every blue moon I'm fabulous.